Through experimentation and play, I was able to communicate the multiplicity of takes for that one selfie image. For months I had envisioned and wondered how I would communicate this in an effective way and I believe this spread requires nothing more than a short personal statement.

Non conventional use of materials:

I painted an abstract using acrylic and palette knife on canvas of a lakefront in Nice, CA. This could be viewed as an evening image where city lights create a colorful glow over the water or centered around the question of a child…”what if water was orange?”

This and primary experience as stated on the poster sparked the idea of posing myself digitally in front of the painting using four different positions and multiplying them over the subjects face. 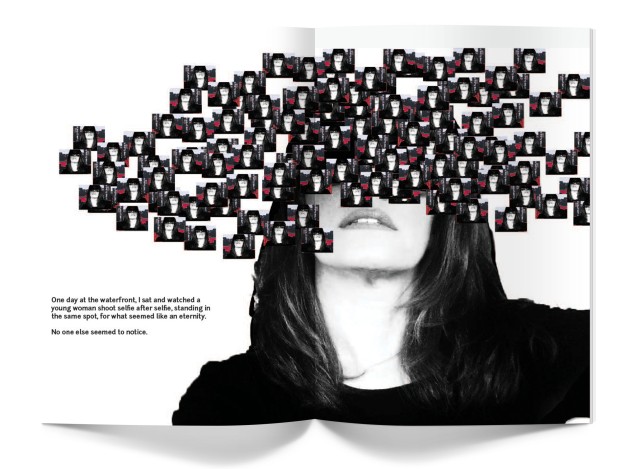 Snapchat filters creating perfect symmetry are causing more youth to seek plastic surgery for the growing mental disorder dysmorphia which is categorized in the obsessive-compulsive spectrum where one sees their own body part as severely flawed and warrants exceptional measures to hide or fix the dysphmorphic part. If the flaw is actual, it’s importance is severely exaggerated.

Plastic surgeons have stated facial symmetry is becoming the most common request for surgery while youth bring in Snapchat photos as the desired outcome.

Visual communication of the problem:

One thing important to my practice is communicating historical techniques of what art is, so I chose to use cubist style with a 2-dimensional focus to illustrate this disorder. I feel this also gives a deeper meaning to the output. Taking from the concept of a central viewpoint, I rearranged and manipulated one nose, one set of eyes, one mouth in an exaggerated asymmetrical arrangement to accentuate the textual message. (The text is arranged in the same fashion.) This single piece used two separate photographs to create a believable illustration of what the sufferer experiences.

This also brings to mind the idea of cutting up photos (with a sharp implement) suggesting visually the process of self beautification and plastic surgery.

The wide-ranging middle ground of objectification falls somewhere in between indifference and dehumanization. A person is derivatized when their sexual parts or functions are separated from the persona and reduced as incapable of representation of self, reducing subjects until they become an external shell of themselves. (Rector, 2014)

This surrealistic rendition conveys an empty subject who is slowly being overcome with self-objectivity by using social media to objectify herself for the spectator. In this scenario the process of self-objectification numbs subject to the outer shell of self. The falling away is the loss of self through this process. 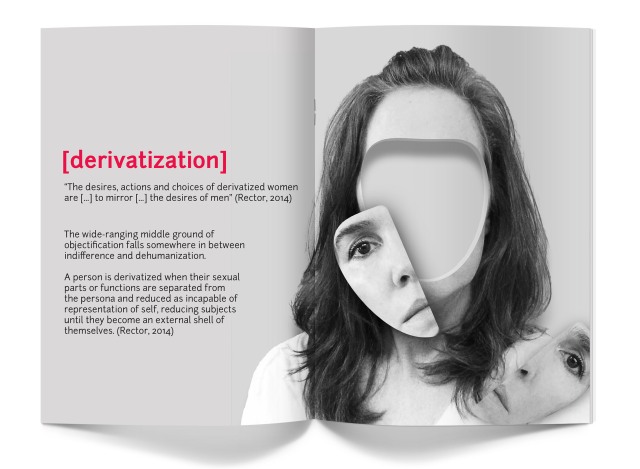 The next two spreads explore the relationship with the mirror. In both pieces, the mirror is the main focus. This is treated with enhanced reflections over the mirrored surface and positioned or overshadowing at least on point of the lifeforce of the subject (mouth, nose or eyes). In the final image the magic mirror absorbs this force using the same reflective treatment to indicate that he self is one with the mirror (madness).

#3 The role played by the mirror in the development of the persona negotiates social constraints of female subjectivity. (Doy, 2015) The artist-self can craft the self-image in an intimate setting then publicly display the technical advanced self on the imaginary theatrical stage.

Dark double image, being overcome with the self. The self-image and sensuality.

The mirror is a tool for self-disclosure

The relationship with the self and the mirror is fragmented

#4 Constant documentation of one’s self and crafting one’s own existence cannot capture psychological or behavioral disorders, narratives which attribute madness to self-images dates back to ancient Greek cultures. (Peraica, 2017)

Is the subject overtaken by the mirror

Obsession with the mirror can lead to madness

Rant and Rage is a zine that started from my research for the Master of Arts program in graphic communication through IDI/University of Hertfordshire. Practice 1 and 2 continue to inform my practice and MA project as phases of portfolio work and research methodologies on cultural issues and debates. Experimentation through practice led research processes aim to resolve design problems that have not been considered in this sector of visual culture.

This site uses Akismet to reduce spam. Learn how your comment data is processed.